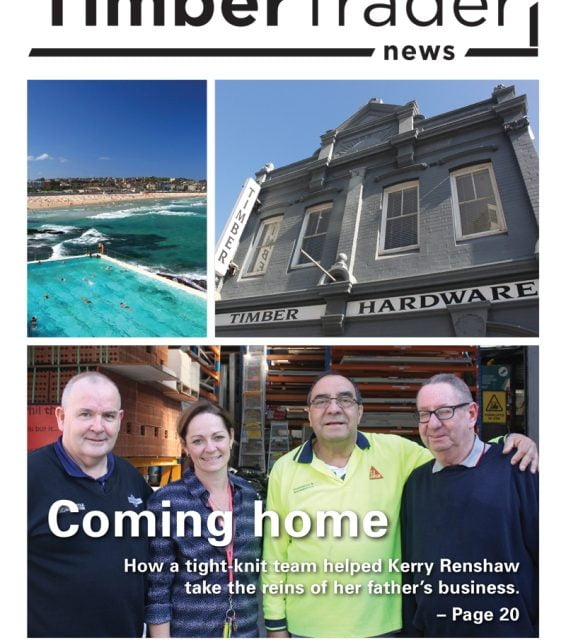 Kerry Renshaw was introduced to the timber industry by her father Neil Houlton, a man who was passionate about timber. So much so that in 2009, Neil decided to acquire the business he was working for, Bondi Junction Timber & Hardware. Kerry says his decision was spurred on by a hope that he would continue in the business for many years to come, and grow it to involve his family. Helping realise her father’s dream, Kerry joined him as a silent partner and took on handling the business’s finances while she was living in the United States with her husband Nick Renshaw and three young children.

Sadly, the arrangement was cut short when Neil suddenly passed away in April this year.

“Dad had only just turned 70 the year before, so it was a complete shock to us. After his death we decided to move back from Indianapolis where we had been based for nearly four years,” she says.

When we first sit down Kerry admits to me that she never expected to be the sole director of Bondi Timber & Hardware, and that she was still very much learning the ropes.

“I’m really new to all of this, I had never had anything to do with selling timber until my father originally came to me about co-buying the business back in 2009.

“So when he passed away the team here had to run things for me, until I could get back. We had weekly calls with them just to keep on top of things. They’re an incredible bunch, they really worked hard over that period,” she recalls.

While she may still be learning the ropes, it becomes quite clear to me that Bondi Timber is a tight-knit team, evidenced by the fact that the staff here have rallied around Kerry since her return to Australia.

Bondi Timber has a long and illustrious history behind it. Once a milk cart factory, hardware store manager Ken Dunlop informs me the old building has long been a staple at Bondi Junction.

Ken has been working with the business on and off since 1980, commencing when he was just 19, and since then he has witnessed a gradual transformation.

“I remember the timber yard wasn’t covered in the early days, it has only been covered over in the last 10 years. It used to be a very open place, and very old fashioned. I’ve seen lots and lots of changes since that time,” he explains.

Ken has been a manager for eight years now, and it is very clear just how invested he is in his staff and customers.

“I prefer working for small companies because it’s more personal. When you go to these big stores you’re just a number, and they don’t care.

“It’s really important to have a great relationship with the customers. I’ve known some customers of ours for over 30 years, and they still come in all the time.

“A lot of them are older now, and their kids are young adults, ones I’ve known since they were children. Over the years the team has even been invited to a few weddings and funerals too,” he says.

Relationships with customers are a key priority at Bondi, and it was an aspect of the business that Kerry noticed first when she returned.

“The customers here are just so loyal, and very complimentary of our staff,” Kerry explains.

While Bondi Timber has an impressive customer base, Kerry informs me that often, many customers aren’t exactly sure who she is.

“Customers don’t really know who I am yet, so if I’m walking around I’ll often get asked, ‘So what’s your project?’, and I’ll say, ‘Well actually, I’m working here!'” she laughs. “They knew dad so well, so once they figure it out they’re very lovely.”

Kerry has a background in commercial business accounting, a far cry from the timber and hardware game she has found herself in now.

“Dad had been managing the store ever since we bought it, so from the beginning of 2009 he was here and would just send me all the numbers while I was living in the US. We’d do directors meetings from wherever we were,” she says.

Kerry and her family loved living in Indianapolis, located in the US state of Indiana, but , as she explains to me, there is nothing quite like being home.

“I miss the shopping in America! and the really close friends we made. But I feel strongly that when you’re Australian, you feel like you fit in so much more here.

“Sydney is just so beautiful too, when we got back I kept taking photos, and my husband asked when it was going to wear off, and I said ‘I hope never!’, because you really do take it for granted. There’s no other country and city quite as beautiful and iconic as Sydney,” she explains.

After life took an unexpected turn for Kerry, carrying on her father’s work was not always going to be easy.

“Dad was really passionate about timber. He had always worked under managers with the same passion – and it became so ingrained within him, he just really enjoyed it,” she recalls.

So, how does the world of commercial accountancy compare to that of timber?

“The big difference is the one-on-one communication with the customers. You get the little old ladies looking for lights for chandeliers, to the expert tradies who come with lots of different requests.

“It’s a variety of different people that I never would have expected, and I’m meeting them all in person rather than from behind a computer screen, which is nice,” she says.

After a rough year, the team at Bondi Junction have picked themselves up and carried on with the job.

Their special formula for providing excellent customer service is clearly working. Contributing to the business’s success, manager Ken explains to me, is the fact that the team offers much more than timber and hardware supplies.

“The hardware and the timber departments work together really well, hand in hand,” he says.

“We also have a very specialised cutting service, run by our machinist Wenceslao Lucero, who absolutely loves what he does. He’s been here nearly 30 years too,” says Ken.

Wenceslao provides a variety of customers with products he creates on-site at Bondi Timber.

“He does a lot of work for local builders, he can make skirtings, doors, you name it! And he’ll cut to size, whereas a lot of other places won’t.

“We even get a lot of school kids that come in with their school projects, and he makes a lot of stuff for them, which really they’re supposed to make!” laughs Ken.

“About five years ago he made an Eiffel Tower for a customer’s child, and that was so impressive. It took him a long time but he was happy to do it for a customer. He’s a lovely guy,” he says.

Bondi Timber offers same day delivery to the majority of their customers, and it’s a service that they pride themselves on.

“Sometimes people ring up and it can be there within three to four hours, and you won’t get that in many other stores. We’re always really busy” says Ken.

Fortunately for the team at Bondi Timber, they aren’t scared by looming competition from ‘big box’ stores like Masters and Bunnings.

“Lucky for us, they don’t seem to be able to afford to come in to the eastern suburbs, and while those stores offer specials that are dirt cheap, their general hardware stock is not as cheap as many expect,” he says.

With managers like Ken to help out, Kerry is confident that her team at Bondi Junction Timber & Hardware will be able to continue running her father’s legacy.

“I’m just trying to run things well, and give the team as much support as I can. With my background, I’m definitely a fish out of water, but everyone has been amazing in helping me out,” Kerry says.

“In the end, we just do the best we can, and hopefully we’ve made Dad proud.” 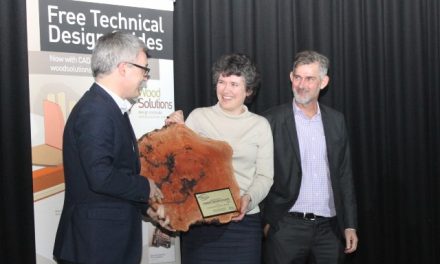 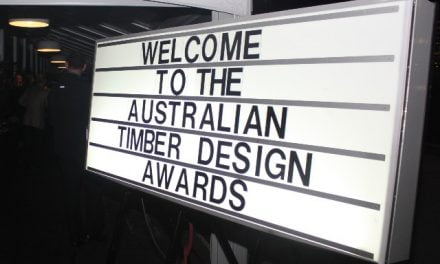