A walk down memory lane

Greg, what was the scariest moment for your during the last 30 years of publishing TimberTrader News?
Scariest moment would be, possibly the four times I should have closed the doors.

What were the circumstances at the time?
They were all financial. Sometimes, in business, you have a passionate idea but not necessarily the business acumen to be able to pull it off and I would be the first to put my hands up and say that business finance was never my strong point.

What saved the magazine at the end of the day?
Just perseverance. The strength of our readership who believed in what we did. We always deliver the right mix of information, marketing and promotion. It just can’t be advertorial, the mix of readable editorial and what I call ‘conversational editorial’, is very important. And we are always focusing on the people.

What is your fondest memory?
It’s countless really, but it’s meeting the people. Every time I’ve gone into somebody’s plant, factory or office, and they may have been readers of TimberTrader News for 20 or more years and I’ve never met them – but they knew me because I always made sure I was visible across the magazine. And I did that because I always believed that the buck stopped with me, which was important.

If anyone ever had a problem with the magazine, they could always call me. All over the country, wherever I travelled (and I did so much travelling). So when you ask me about my fondest memory, it will always come back to the people. The joy of meeting each and every one of them.

What were the biggest changes you witnessed in the industry?
The development of Engineered Wood Products (EWP) was a big one. I was actually at the launch in 1986 of Laminated Veneer Lumber (LVL) that the Woods and Forests Corporation held and I met my future wife Paula Farrell there. Paula and I were eventually married for 20 years before she passed away.

That was the most significant change to the industry that I saw, but a lot of other things happened. The consolidation of the industry was always sad because many family businesses were taken out of the industry by corporatisation.

But, the most important point, was the change that EWPs brought along, and the fabrication industry changing. It was still going in those days but since then it’s expanded, and today about 85 per cent of houses built in Australia are done with only approximately 300 fabricators.

What was your favourite cover story?
Now, now, that’s not fair! Well, Dick Campbell’s story that we recently revisited on the magazine’s Facebook page with a ‘Flashback Friday’ comes to mind.

Dick was a timber merchant from Woy Woy, New South Wales, and was also a former World President of Hoo-Hoo (an organisation he was very active in).

I remember when Dick and I went out fishing one day. He was a very successful businessman, and we were sitting out on his boat for nearly four hours. He caught a few fish but said to me, “You haven’t caught anything!”, and I said “Well, that’s because I haven’t put any bait on my hook!”.

He asked me “Why not?”, and I explained to him that I just wanted to sit there and listen to him talk instead, because the man was very intelligent, and I loved listening to people just like him.

It has always been one of the joys of what I have done over the years. Quite simply, to sit and chat with successful people.

I have a philosophy that if I meet a successful person I will take them out for lunch, because I want to learn what they have to say. 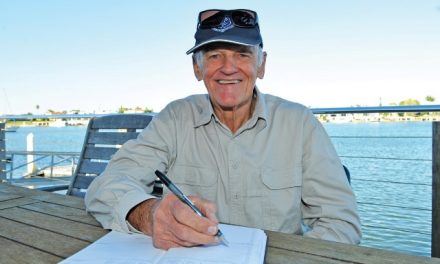 Stars in their eyes