Bert was the patriarch of the 160 year old Faggs Bros. Hardware and Timber, the eighth oldest family business in Australia. Bert worked in the business for a staggering 67 years before retiring at the age of 82, yet remained involved in the business as Chairman of the board from 1989 up until his death last month.

Bert’s life was celebrated in his home city, Geelong, Victoria, at the local Wesley Church on 16 July 2015, with his funeral attended by hundreds of mourners and seven eulogists, which included his children and great-grandchildren.

Bert was a devoted husband to his sweetheart Ruth Fagg for 70 years, and a beloved father to Peter, Rosalind, Barry, Keith and Marion. Bert’s funeral reflected on his passions, community involvement and humble personality.

Often known as a quiet achiever, the life led by Bert Fagg clearly spoke volumes to those around him. This was a sentiment shared by his children, who spoke of the man who was devoted to his family, a conscious businessman and someone who always did more for others than he did for himself.

Speaking about his father’s younger years during his eulogy address, Barry Fagg recalled his father’s early passions and what lead to his life in Victoria’s timber and hardware industry.

“When Bert was young he was passionate about Hornby Model Trains, and gathered an impressive collection. Such was his enthusiasm, he ended up forming a local Hornby club, an early indicator of his interest in engineering,” he recalled.

As is often the way, Barry remembered how circumstances had different plans ahead for Bert.

“Dad really wanted to be an engineer, but he did what was expected for the family, and followed his father into the timber business,” Barry said.

A third generation family member, Bert started out as an apprentice in carpentry and joinery at the Fyans Street Timber Mill and Joinery. Bert also studied design and construction during night classes, which was followed by serving in the Army’s design office in Melbourne during World War II.

“Post-war was a time of expansion for the Fagg’s business, and in 1955 dad coordinated the construction of a large storage shed that incorporated 15 m span bowstring roof trusses, which he designed and built himself.

“And even though the shed was later demolished, the trusses were reused and today – 60 years later – can still be seen as a key component of the roof structure of the South Geelong Garden Centre, as sturdy as ever,” Barry said.

Often known for wearing his signature khaki bib-and-brace overalls, Bert was extremely hands-on in his joinery trade, and personally trained well-over 30 joinery apprentices in his lifetime. As Barry explained, “Dad took a quiet pride in teaching and sharing his knowledge”.

Bert became a member of the board at Fagg Bros. in 1953. He was considered integral to important decisions – including the choice to join the Mitre 10 buying and marketing group in 1964. Following his brother Stan’s death in 1989, Bert then went on to become Chairman the same year.

In Geelong’s building industry, Bert Fagg became something of a legend, as Barry explained during his eulogy, “He always acted ethically and with integrity”.

Summarising his father’s life, Barry concluded with the following words;

“Dad did not impose his will or ego on to his children. While we knew dad always wanted us to join the family business, we did not feel any pressure to do so.

“The term ‘a great man’ should not be used lightly, but for me, my father was indeed ‘a great man'”. 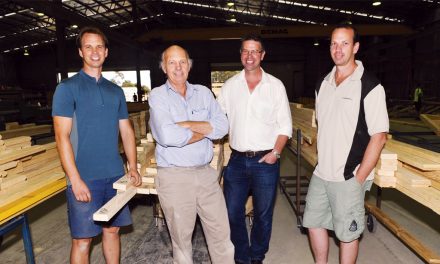 It’s a state of mind

Where are they now? Charlie Henry