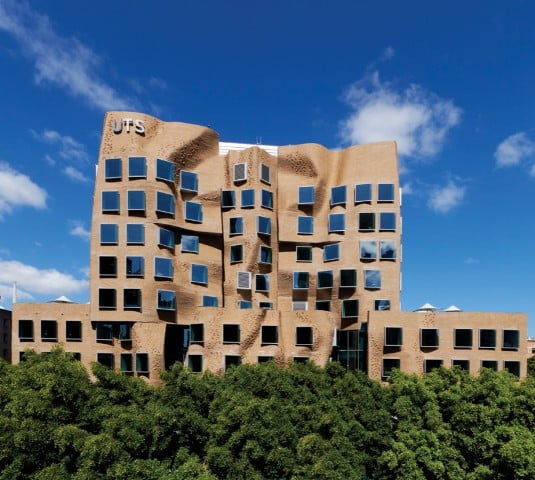 Named in honour of Australian-Chinese businessman and philanthropist Dr Chau Chak Wing, the new building is home to the University’s Business School, and resembles what public conversation has dubbed as a ‘crumpled brown paper bag’.And at a project cost of $180 million, it’s certainly an expensive brown paper bag.

The building’s namesake, Dr Chau Chak Wing, said he was delighted Frank Gehry had accepted the UTS commission. “His design is distinctive and full of passion. There is nothing like it in Australia, he is an unparalleled architect,” he said.

While the design architect was Gehry Partners, LLP, UTS engaged with executive architects Daryl Jackson Robin Dyke Pty Ltd and contractor Lend Lease to bring this vision into existence on time and, even better, on budget.

A TALL TREE TO CLIMB

Inspired by the idea of a treehouse, Gehry described the concept to ABC Reporter Adrian Raschella earlier this year as a “growing, learning organism with many branches of thought, some robust and some ephemeral and delicate”.

Years ago, when Gehry originally scribbled down his designs during a visit to the Sydney suburb of Ultimo, the landmark’s future home, his vision was that of a treehouse-shaped building with a trunk, as well as branches that would house the space for UTS students to learn and reflect.

The Dr Chau Chak Wing Building was designed from the inside out, starting with the collaborative learning and work spaces at its centre which are wrapped by the innovative use of laminated timber beams.

Beating at the centre of Gehry’s latest masterpiece is, both in its structure and design, a step forward for the Australian timber industry.

On levels two and three of the building are identical oval classrooms constructed from approximately 150 large laminated timber beams, each weighing up to two tonnes, the longest one measuring an incredible 12 metres.The beams create a sculptural form within the ground-floor atrium void.

Remarkably, the classrooms feature the world’s longest timber-concrete composite floor construction, the first of its kind in Australia.

Encouraging dialogue from all students and teachers within the classrooms, rather than the traditional model that enforces a projection-style of teaching, were designed with the intent to inspire collaboration. The staircase also provides those who climb it with a detailed look at the laminated timber beams.

Coined a ‘timber nest’, the ‘Jenga-like’ structure at the centre of the building is where Gehry’s use of timber shines, a physical interpretation of the trunk at the centre of his treehouse metaphor.

Someone who understands his metaphors well is Natalie Haydon, currently working as a Site Engineer for Brookfield Multiplex in Sydney. She interned at Gehry Partners (GP) in Los Angeles, alongside Frank Gehry himself, and was lucky enough to witness the conception of the ‘nest’ design back in 2010.

“I remember the day in the GP office when the ‘nest’ for the Chau Chak Wing Building came into being. Craig Webb, who is one of Frank Gehry’s few key and trusted designers, roughly sketched the concept and passed it to me to model iterations out of balsa wood. After a week of prototypes, one was selected by Frank and Craig for 3D scanning into the project’s model,” she recalled.

Natalie said the use of timber was a reflection of Gehry’s focus on nature in his designs, and his aim to find the beauty in minimalism. “It was such an amazing process in its simplicity and whimsy,” she said.

The decision by the Gehry team to use a large amount of laminated timber beams internally shouldn’t be a surprise.

Natalie said timber’s role wasn’t just isolated to the final product. “Gehry Partners have a beautiful appreciation of timber. They use it extensively when hand modelling during the design phase of their projects.”

And the relationship between Gehry’s designs and timber looks set to continue. “The Guggenheim museum in Abu Dhabi will feature massive timber blocks on a scale never before seen – I really look forward to viewing it one day,” Natalie said.

FROM GRAIN TO GREATNESS

McIntosh have been active in providing Glulam timber solutions for the international market, including project work in Australia, for over 30 years. They were selected as the manufacturer of the timber beams used in the UTS Building and as Owen Griffiths, Marketing Director for McIntosh, said – the nature of the project was unique in its challenges.

“For this project we worked closely with the design engineers and architects to explore the most effective way of producing the hundreds of individual Glulam blocks that make up the impressive oval classrooms,” he said.

While looking like a “random collection of blocks”, Owen explained that, in fact, each block had to be individually detailed and shaped to fit into its unique location within the three-storey structure.

This process was fast-tracked as the consultant team had initially shared the digital model with the contractor. This allowed for the intricate, 3D geometrical placement to be replicated throughout the manufacturing phase and on site.

“With sizes of 650 am deep and 450 wide and in lengths from 2 to 12 meters, large-scale equipment was necessary to accurately produce them,’ he said.

F & D Normoyle Engineering were the sub-contractors of Lend Lease, who were supplied the Glulam blocks by McIntosh. Along with the accuracy required in the manufacture of the Glulam beams, they were tasked with the challenge of building in Sydney to meet equally exacting tolerances.

“The outstanding result produced by Normoyle, reflected today by the unique set of classrooms that live within the building within a building, is a testament to their commitment and skills in bringing Gehry’s vision to life,” Owen concluded.

The UTS Dr Chau Chak Wing Building is located in the education and creative precinct at the southern end of the Sydney central business district.“The fold is primitive, you’re in your mother’s arms when you’re a child, and so we tried to do that with the brick.” – Frank Gehry, on the design of the UTS building.