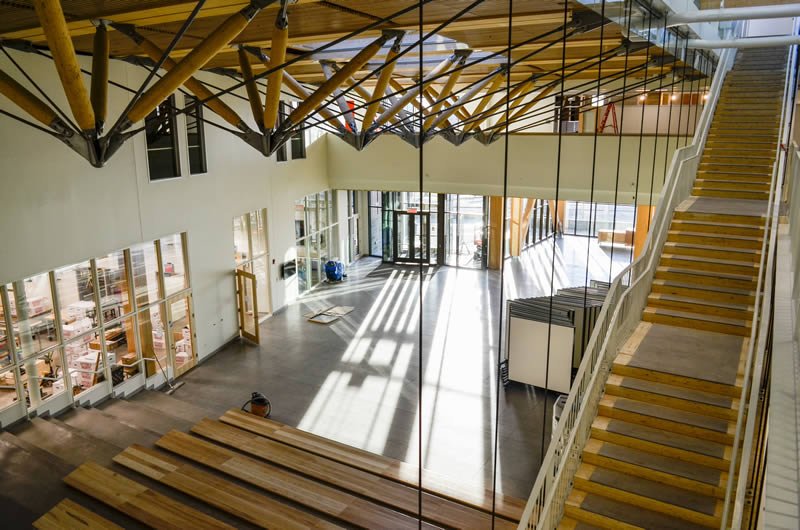 It seems logical that the largest and most technologically advanced contemporary wood structure in a US academic setting should be home to three design schools at the University of Massachusetts. Long a home of engineering excellence and sited near prized forests, UMass helped develop some of the technology that makes the building a success.

The four‑storey, 8129m² building was designed by Leers Weinzapfel Associates (LWA), in conjunction with faculty from the three departments it would be housing. Two members of the BCT program were instrumental in the decision to build in mass timber rather than steel: Peggi Clouston, whose PhD in engineering mechanics specialised in wood, and Alex Schreyer, whose background is in structural engineering and wood science. Both championed the idea that mass timber could not only deliver a superior structure, but also a superior place of learning.

Even then, it wasn’t until former Massachusetts congressman John W Olver secured additional state funding based on the fact the building would be an important demonstration of the technology that the decision was made to use wood. Overall, the building, which was named after Olver, cost US$36 million for construction.

Most of the glulam members used in the gravity framing system are black spruce with a balanced layup and an unadjusted bending capacity of 2400 psi. Members were sealed during manufacture, and additional sealing was added on site for members in high-traffic areas.

A case study of the building provided by WoodWorks Wood Products Council outlines the structure: “The Design Building is organised around a two-storey central atrium … Dominated by the composite zipper truss roof structure, the atrium also features a three-storey, folded CLT stair, hung from a single long-span truss with thin rods that give the impression it’s floating.

“Facilities used by all three academic departments surround the atrium in the building’s main volume … Above the atrium is a green roof that functions as a public courtyard and outdoor learning space for students studying urban landscapes.

“A curtain wall system exposes much of the building’s first floor, including the timber structural system and atrium space, inviting interaction with passersby. The second storey cantilevers several feet beyond the first, and the second, third and fourth storeys are clad with a panelised rainscreen system.”

According to LWA project manager Tom Chung, building in engineered timber allowed the team to reduce the number of beams required by about half, keeping the design open and still cost-effective.

Because so many of the materials used in the project had not been specified for use under local codes, the construction plans and process required a long list of third-party reviews, but ultimately every variance was approved.

The eye-catching timber and steel composite zipper truss that runs through the atrium (see photo, right) is one of the most notable features of the building and resolves significant structural challenges. The 25.6m-long atrium was constrained by the site’s geometry and is much wider at one end than the other. There is a rooftop garden above it and both the roof and the adjacent courtyard have heavy snow loads in winter.

Equilibrium Consulting was brought in as structural engineer and laboured over the design of the trusses using RFEM software from Dlubal. As Robert Malczyk, principal at Equilibrium Consulting said of the results: “Last winter the entire courtyard was filled with snow, but there was no movement, no damage, no cracking… We’re very proud of it.”

Each zipper truss converges four 23cm-diameter timber struts and four varying diameter steel bars at a single point to transfer the load back to the upper glulam beams. The 4m-wide trusses vary in span length from 11m to 18m along with a varying depth between 2m and 3m. The spans cover the widths of the atrium without any intermediary structural columns. Each truss includes a 45cm-deep glulam top chord compression member, which spans the width of the commons, is capped with steel ends, and is supported by a column at one end and a steel truss on the other.

The wood-concrete composite floor system uses technology researched and tested at UMass by BCT. While similar systems are reasonably common in Europe, they are comparatively underused in the US.

The system is comprised of a concrete slab integrally connected to wooden panels and/or beams below by means of shear connectors. In this case, the floors include steel mesh connector plates known as the HBV® system, a patented product from Germany. The perforated metal plates are glued into notches routed into the CLT floor panels and concrete is poured on top. Spans varied from roughly 6-8m and the number and spacing of connectors varied with the floor span.

The composite material has significantly better strength and stiffness than the same materials acting separately, and better sound and vibration dampening and fire-resistance than timber floors. All this with the benefit of considerably reduced weight compared to a concrete floor.

Other environmental benefits of the building include glazing and skylights to maximise daylight and significantly reduce artificial lighting energy. Storm water is collected from the roof and filtered via a series of successive bioswales and timber dams to the lower end of the site and eventually back to the Connecticut River.

The building was judged by architects and related professionals as US Building of the Year at world-architects.com. You can find the complete WoodWorks report at woodworks.org/wp-content/uploads/UMass-Amherst-Olver-Design-Building-WoodWorks-Case-Study.pdf. 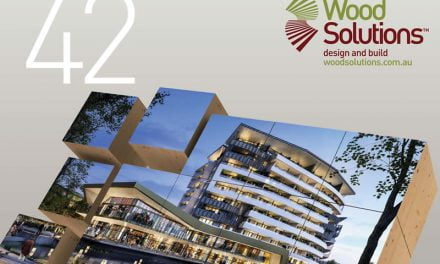 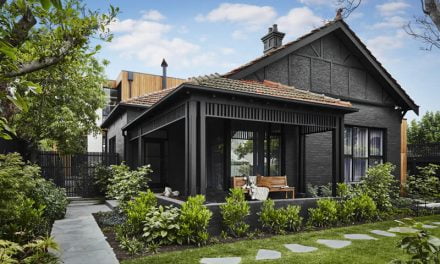 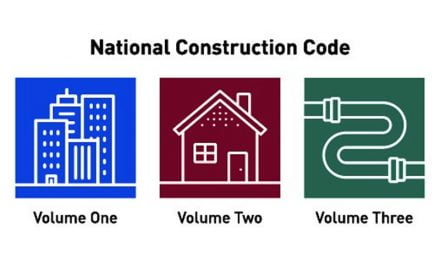 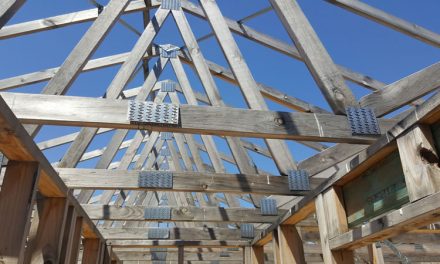