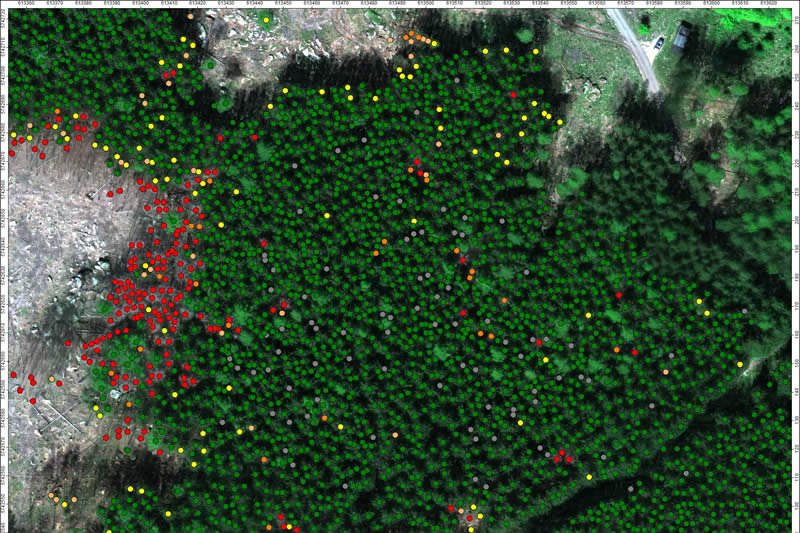 A German company is developing a ‘guardian angel’ for foresters.

Hamburg-based drone and software company Skylab has combined clever drone technology with a sophisticated, adaptable algorithm to help foresters detect sick and infested trees early; stopping the spread of problems such as destructive bark beetles before they take hold of large swathes of forest.

As Skylab describes the process on its website: “Plants absorb and reflect sunlight at different wavelengths. A healthy leaf absorbs most of the blue and red light but it reflects more green light (hence it appears green in our eyes) and significantly more in the infrared area of the spectrum. A stressed plant has a reduced chlorophyll activity and hence it reflects more light across the spectrum, but it absorbs a little more in the near-infrared band. Special multispectral drone cameras such as the Parrot Sequoia can record this phenomenon and provide the basis for calculating a range of specific plant vitality indices.”

The project has been developed in conjunction with the Nordwestdeutsche Forstliche Versuchsanstalt (the forest research agency of northern Germany). Bark beetle is a growing problem in conifer plantations worldwide, driven by the pest’s enormous growth in habitat thanks to climate change. Damages are estimated at around 1 billion euros (A$1.55 billion) per annum worldwide.

The software consists of machine learning algorithms that were trained on the data collected by drones and confirmed by ground inspections to the point where the aerial/software investigation had ‘learned’ enough to match or better the accuracy of the human investigation, with a vastly increased coverage at lower cost.

Once calibrated, the aerial investigation out-performs the manual. Stressed trees show up in the imaging sooner than they become apparent to visual inspection.

Albrecht von Ruffer, Skylab’s CEO and founder, describes their work: “We are using multispectral imaging to calculate different vegetation indices, we combine this with various other photogrammetric methods and statistics to determine if a particular tree is stressed or not.

“We cannot determine the [precise] cause of the stress, but in spruce forests it is most likely water/drought stress or bark beetle, and if the tree is under drought stress, it is a prime target for bark beetle. We do our analysis on an individual tree level, but are more likely to generate heat maps showing tiles where infection seems most likely from our analysis. The GPS signal in the forest is quite unreliable, so giving foresters individual [infected] trees to find is likely to be frustrating.”

Accordingly, the data is used to assign a specific risk index to each tree/stand of trees and to target stands for treatment or preventative harvesting when necessary.

Multiple types of data collection are being used by Skylab as they further develop their processes. As von Ruffer says, “For our test projects we are using a standard DJI Inspire 1 multicopter into which we have integrated the Micasense RedEdge-M multispectral camera. This can fly approximately 12-15 minutes to cover some 15 hectares.

“For routine missions we are using fixed wing drones but then Skylab subcontracts the flight job to professional drone operators such as Cooper Copter GmbH (Hamburg, Germany) who have custom designed the Blackbird drone to fit the Micasense RedEdge-M and a hi-res Sony RX1 at the same time. This flies for about one hour and, depending on flight height, can capture some 200 hectares per flight, or up to 2000 hectares per day.”

The data captured has uses well beyond disease detection, including terrain analysis, tree height modelling, quantification of losses and precise harvest forecasts. Moreover, the two components of the aerial surveys are separate: Skylab can analyse data collected aerially by other companies, even that gathered abroad.

As von Ruffer says, “For even larger forest tracks we are working with plane data. We are currently working on a 2300-hectare forest inventory project in Northern Scotland. Generating inventories, harvest management plans and yield prediction models to plantations is an important product for us. We thus help to optimise the management, including predicting the optimum time of harvest to maximise economic gain of plantation timber. We also provide high-res data to nature reserve managers monitoring spatial and temporal changes.

“Our aim is to provide the best possible, highly efficient and accurate algorithms to forest owners worldwide. The drone or plane images are provided by the customer or a local service provider and uploaded to our dedicated platform for an automatic analysis. This way, we can also efficiently cater to customers in South America or Australia.”

With biosecurity concerns on the rise worldwide, Skylab’s methodology offers a cost- and time-effective method of forest management that significantly decreases risk to both crops and workers.

But von Ruffer knows that drone surveillance isn’t appropriate for every land management team. Australian and South American timber holdings can exceed the size possible for close investigation, and some forestry management bodies have already invested in satellite monitoring.

So von Ruffer and his team are developing new technologies to work with these situations. He says, “In order to further scale up the business, we are aiming to use the drone as a kind of magnifying glass to generate hi-res spot samples which are then used to calibrate lower-res satellite images. This way we can extrapolate the drone-based data to provide detailed forest parameters on a large scale based on satellite data.”

At the same time, Skylab is working on an inventory for a eucalyptus plantation in Spain to develop a yield prediction model that takes the height as measured by analysis of drone data to develop a site-specific function of height to diameter at breast height or root neck. “As the relationship/regression between the two values is very stable, we will be able to very precisely make yield predictions of the current stand,” says von Ruffer

Just as with the current Skylab products, the interface for data and results will be available any time, any place, in mobile, WebGIS and desktop formats (compatible with all standard GIS and forest-management tools), allowing for real-time field use, as well as in-house research and planning.

And the company already has visions beyond forestry. “We are currently working on several test projects to apply our bark beetle methodology to other tree and shrub crops, particularly orchards and vineyards,” von Ruffer says.

For more information on the technology, visit www.skylab.global 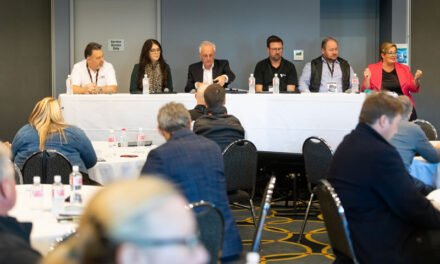 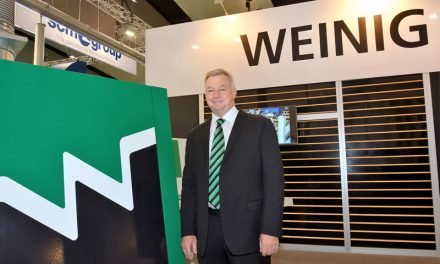