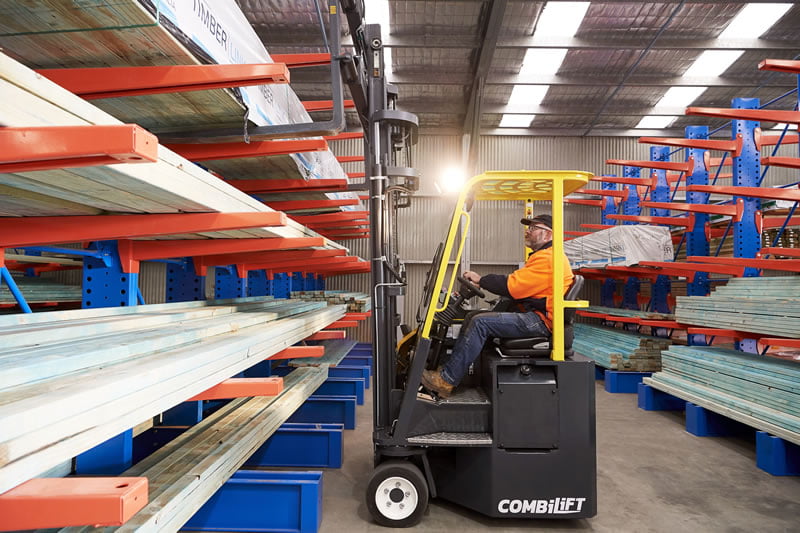 By concentrating on lifting equipment that keeps load movements and people down low, while still allowing high racking and loading, Combilift is driving safe workplaces internationally.

Martin McVicar has travelled to work sites around the world since he and fellow engineer Robert Moffett founded Ireland-based Combilift in 1998. “People everywhere talk about safety in their processes,” he says, “but from what I have seen, safety is genuinely at the top of everyone’s agenda in Australia.”

Whether due to our high insurance costs or strict legal penalties – or just common sense in a country that already has enough things happy to kill you, a commitment to workplace safety has seen Combilift products embraced here.

“From the start, we designed our lifts around being able to handle goods more safely,” McVicar says. “Particularly long loads of the type you find in timber framing and engineered wood products.”

He and Moffett set out to solve what they saw as core problems in the industry, such as forklifts requiring large spaces in which to operate. By moving the centre of mass in their first model, the C-Series, they made the units smaller and increased stability. They designed a multi-directional drive to travel smoothly sideways through narrow aisles, then change with the flick of a switch to forward motion with no need to turn. Not only did it make the vehicle more manoeuvrable, it removed one of the main risk factors: lifting long loads above vehicles or workstations in choke points. Now loads could be kept low to the ground and moved sideways instead. A low platform where the load weight can rest gave further stability and also reduced wear on the mast and forks.

So successful was this new style of lift that it’s still in production today, with capacities from 2.5 to 25 tonnes and lift heights up to 12m.

“Part of its success in the Australian market has been the fact it lets people move materials more efficiently, which results in a lot of space saving,” says McVicar, “but for a lot of our clients they’re also buying on the value we bring when it comes to safely handling long goods.”

Both were key concerns for the Gubbins-Pulbrook Mitre 10 team when they bought their first Combilift, says MD Steve Pulbrook: “We now own a C-Series and two Combi-CBs and have another one leased. Our timber yards have been designed around their use.”

Gubbins-Pulbrook operates four sites in the NSW Southern Highlands, two at Mittagong, one at Bowral and one big one at Moss Vale, which incorporates a frame and truss plant. “Initially it was economics that made us look towards Combilift products,” says Pulbrook. “The cost of land here is high, so when we researched these lifts we realised we could get racks at 4m spacings instead of 6m or 7m. That means we can put a lot more on a smaller space. And that has a lot of economic benefits. For a start, we don’t have to buy the land and concrete over such a big area, but also the smaller a site, the easier it is to have your staff working efficiently and you know where they are and what they’re doing.”

They designed the racking system at their Mittagong and Bowral stores around the lifts’ capabilities. “Our first was a C-Series, and then we added the first Combi-CB, which seems to be the perfect fit for us,” Pulbrook says. “It’s multidirectional and designed for lighter palletised loads and long loads, which is most of our business. We were able to tailor our orders with forks that go out a little bit further, so it’s even safer to use with long loads, which are what we’re carrying most of the time. We knew that it was safer for people, because you’re not carrying loads over them, and the operator visibility is excellent, but we found it’s also safer for the product: it doesn’t get chipped or flex and bend or break.”

Gubbins-Pulbrook Mitre 10 is set to buy yet another Combilift as part of the redesign of their Moss Vale operation. “Our whole system is designed around using these forklifts,” Pulbrook says.

Putting it into practice

Chris Littlewood, Combilift country manager Australia, says operator, site and product safety concerns are at the heart of the inquiries he takes. “We have people ring up who’ve heard about one of our models or seen us at a trade event, and I tell them, ‘Let’s establish what you do, to see what’s right for you,’” he says.

That process involves a site visit that will investigate everything from what’s being lifted, to the climate, the site itself and its personnel and workflows.

“When it comes to forklifts, the call often comes because they like the safety features that are core to our trucks, but as we discuss their business, we find additional ways to help them,” says Littlewood.

“Some 90% of the 7000 vehicles we manufacture each year are customised in one way or another, so that might mean longer forks for handling long packages of timber, as for Steve Pulbrook. Or it might mean you want a fully enclosed cabin because you’re on the South Coast and it rains a lot. In Queensland, you’ll want air conditioning. When it comes to your tyres, we can provide options to safely manage various conditions, including mud and snow. We can add proximity sensors, or specialty equipment for specific loads…”

Quite often, Littlewood finds himself recommending a different machine to the one the customer likes. “Our Combi-CB is a brilliant workhorse truck and people often enquire about it, but there’s a big difference between doing a few lifts an hour and continuous use for 10-hours straight,” he says. “I’ve told some people the CB is overkill for their business and recommended a pedestrian unit instead. We’d rather do that and have the customer be happy, with something that suits the size of their loads, than make the bigger sale.”

The pedestrian range includes 1- to 16-tonne capacity counterbalanced stackers, reach stackers and pallet trucks, all with a patented multi-position tiller that lets the operator position themselves at the side of the vehicle while it’s in use, keeping out of the crush zone between machine and racking, as well as maintaining excellent visibility of the forks. Able to work in aisle widths of just 2.1m, it’s particularly helpful for order picking in busy warehouses.

Littlewood adds, “Other times, we’ll go to a site and their biggest concern is loading and unloading trucks. So we’ve said, ‘What about a straddle carrier?’ and that’s not only solved their loading issues, it’s let them change their whole loading philosophy.”

The Combilift Straddle Carrier has been in production for over 10 years and is designed to remove the need to load trailers at height. With a 20-100 tonne lift capacity and ability to lift containers, flat racks and proprietary racking systems such as Roadpods, the Straddle Carrier allows loads to be fully packed and strapped at ground level and then lifted into place, with final retaining measures managed by a walk around the truck.

“Traditionally, these sorts of truck loads were prepared at trailer height with people guiding and fixing loads on top of the trailer,” says McVicar, “Or you might have four regular forklift trucks if you’re staging the full load at ground level and then lifting it up to allow a trailer to reverse underneath. Instead, the Straddle Carrier does the full load in one lift and sets it onto the trailer without the need for anyone to be on top of the trailer or in the vicinity.”

More than just removing a working at height risk, loading at ground level involves fewer lifts overall, so the risk of damage to finished items, particularly frames and trusses, reduces dramatically. “And they can be stored at ground level until the project needs the goods,” McVicar adds.

“They’re not tying up trailers that are needed elsewhere, you can have the project packed and ready to go and then the transport comes in and picks it up when the customer’s ready to take it. You require fewer trailers, or can use them for more deliveries, and the time for loading is reduced from 2-3 hours down to 10-15 minutes.”

In a similar vein, the recent Combilift Slip-Sheet is designed to load and unload long goods in containers. “It’s particularly useful with the sort of long packs of EWP timbers that are common these days,” says McVicar. “You might need two regular forklift trucks to attempt to load a container with this sort of product, it takes 20 minutes-plus and there’s a lot of potential for danger in that manoeuvre. Alternatively, the CSS lets you prepare the full load on the bed and then in six minutes you can load it into a container. For importers, it’s more efficient to de-stuff containers at their location, and there’s also less risk of product damage. While for Australian producers, inter- or intra-state container shipping offers many advantages once you have the infrastructure in place.”

Safety is far more than a selling point for Combilift. For its 20th birthday, the company built a new 46,500m2 manufacturing facility in Monaghan, Ireland, which included a full traffic audit and barriers around walkways.

“We invest 7% of our annual revenue into R&D,” McVicar says, “And a lot of that is focused around developing products that can handle goods more safely. It’s not just us thinking ‘This is what our next product should look like’, it’s a collaboration with our clients and customers, because we share that key goal for our workplaces.” 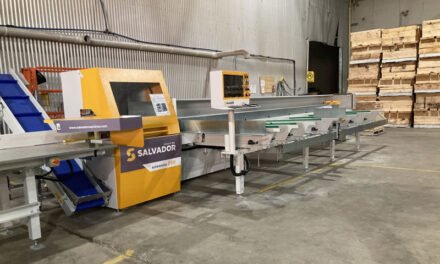 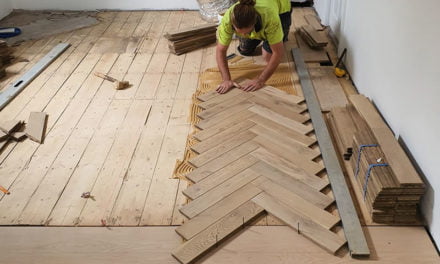 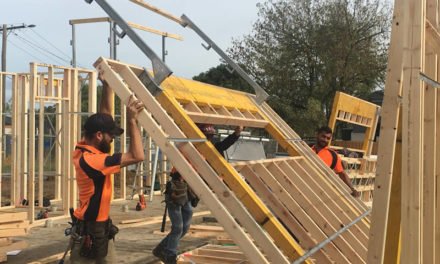 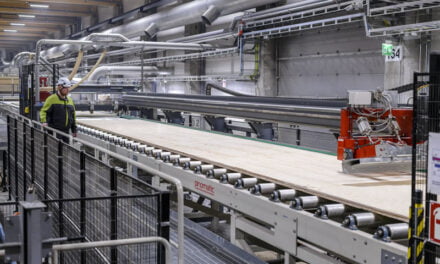