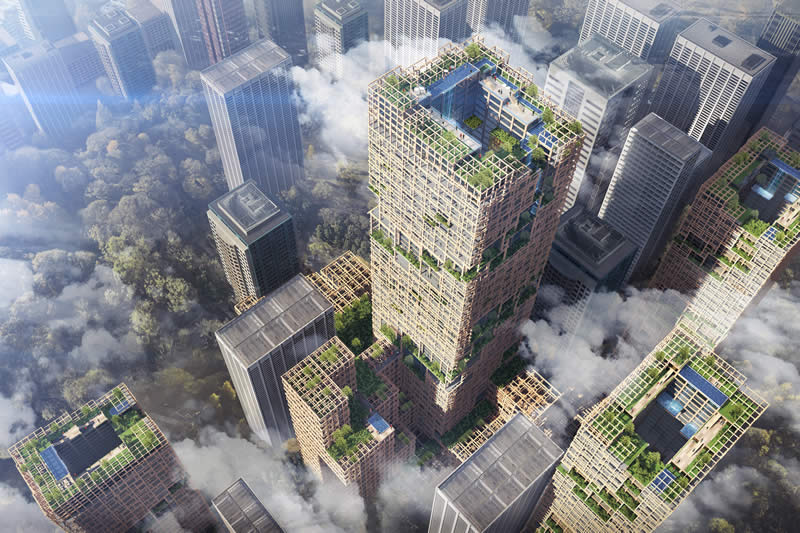 Around the world, there’s a movement to tall timber buildings, thanks to engineering advances. Here’s how the hype over height can benefit cities and industry.
By Donyale Harrison.

In 2016, Australia’s National Construction Code changed to allow timber structures to be built to a maximum height of 25 metres — or eight storeys —without requiring lengthy and expensive review processes. The NCC change was directed at mostly light timber framed constructions and came with set requirements including fire sprinklers and fire-resistant cladding.

In the two years since, the amendment has given suburban builders the ability to build in an environmentally sensitive material that was once the preserve of developers who could afford to steer it through the approvals process. In medium-density suburbs, homeowners are reaping the benefits of lower costs.

But already the sector is moving ahead. Heavy timber frame construction using engineered timbers has taken off around the world, and buildings are reaching for the sky. Mjøstårnet, an 18-storey glulam tower is nearly finished in Norway. Tallwood House, a mixed timber and steel-construction student residence has been completed in Canada’s Vancouver. Oakwood in London is proposed as an 80-storey extension to the Barbican, while Japan’s W350 would dwarf even that at 350m in height.

While not all proposals will be built, they drive forward research, technology and, most importantly, the sense within the marketplace that timber is an appropriate, desirable material for tall structures.

Race to the top

A sure way to grab attention from both media and fellow architects/builders is to be ‘the first’. This has led to a raft of record-topping builds, some realised, some in progress, and some just plans at the moment.

The following represent a range of timber-based construction methods, some of them composites, such as timber and steel frames. The Council on Tall Buildings and Urban Habitat (CTBUH) has a Tall Timber Buildings Working Group in place at the moment seeking to define a Tall Timber Building. Not all the following meet their working criterion of “a building for which the vertical and horizontal loads are predominantly resisted by timber elements”, but all driving innovation.

In 2013, when it was completed, Forté was the tallest all-timber building in the world. A 10-storey, 32.2m-high apartment building, it was built from 759 prefabricated CLT panels imported from Austria. Made of European spruce, the panels were assembled using 5500 angle brackets and 34,550 screws, giving rise to endless IKEA jokes at the time. The ground floor and first-storey slabs are geopolymer concrete, giving a barrier between the timber and the ground, and the building is clad externally and internally. The lightweight construction suited the poor ground conditions, and even with the huge carbon spend invested in freighting materials from Europe, it was still one of the country’s first 5-star Green Star As Built projects.

A popular student accommodation building at the University of British Columbia in Vancouver, Tallwood House stands 57.9m tall and has 18 storeys. The first storey is concrete, with the upper 17 storeys comprised of timber-steel hybrid construction, with two concrete stair cores serving all floors. The floors are 5-ply CLT panels supported on glulam beams with steel connectors allowing for direct load transfer between the columns and providing a bearing surface for the CLT panels. Construction in 2017 took 70 days, four months less than a typical project of that size, and the prefabrication reduced on-site waste by about two thirds.

Featured in February 2018 TTN, Mjøstårnet is nearing completion on the shores of Lake Mjøsa. An 81m, 18-storey mixed use tower, it has a wholly timber structure and was built without external scaffolding, relying instead on a sophisticated glulam system that rises floor by floor, supported by itself. Component parts were all made locally from sustainable, local resources, improving the regional economy even before building commenced. The carbon footprint of construction is estimated at a particularly low 65kg CO2/m2.

Construction is about to begin on the 25,000m2 floor area Skellefteå, just below the Arctic Circle in Sweden’s North. It’s a region where tall timber structures have been built for over a millennium and the material was a natural fit for this cultural centre/hotel complex. The low-rise cultural centre has HBV floor slabs, which are a timber/concrete hybrid, helping to dampen large quantities of noise from the performing arts facilities in this section. A green roof helps with thermal and noise insulation and prevents excess water run-off. In the hotel high rise, pre-manufactured CLT hotel modules sit within a skeleton of glulam beams and timber, with lift shafts, stabilising cores and shear walls also made of CLT. Skellefteå Cultural Centre by White Arkitekter was a shortlisted finalist in the MIPIM Awards 2018.

About to commence construction in the Saint-Jean Belcier area of Bordeaux, Hyperion features three towers with a total of 176 housing units, plus offices and shops. The tallest tower reaches 57m and 17 storeys, with concrete forming the core and first three storeys. Surrounding this rigid spine is a prefabricated wooden structure primarily built of CLT with a glulam post-and-beam substructure. The two smaller towers are timber framed, with all three featuring cantilevered balcony gardens and green roofs. The lightweight timber partitions of the towers are easily removed, so residences can be adapted for the families that live in them.

A proposal from PLP Architecture and Cambridge University, Oakwood could stand 300m above the Barbican in the heart of London, providing up to 1000 much-needed new homes. Researchers are using the exercise of designing the tower to solve the complex building, construction, safety and aesthetic requirements of this central site. Even if the tower doesn’t go ahead, the results will guide other developments. Timber was chosen because of people’s affinity with the material, softening the impact of high-rise living.

Soaring 350m into the sky, W350 is designed by Nikken Sekkei for builder and developer Sumitomo Forestry and is slated to be completed in 2041 to mark Sumitomo’s 350th anniversary. A mixed-use building, the plans describe a 9:1 timber-steel hybrid construction with integrated seismic resistance. Greenery will be encouraged along balconies that surround the building from the ground to the roof, increasing the environmental benefits of the building. It is estimated that W350 will take 185,000m3 of timber to complete the structure and cost ¥600bn.

Most of the heavy timber frame (mass timber) construction benefits listed above for individual buildings are true for all. But there are more mass timber advantages than just environmental and cost savings.

The strength of the material allows for long spans and cantilevers without supporting beams, opening up rooms for architectural playfulness. Moreover, most CLT panels can be physically cut through in many ways, literally opening up options for everything from doors and windows to integral storage and built-in furnishings and stairs.

For cities where housing is urgently needed, mass timber saves 30-40% of the program time in construction over similar buildings using traditional materials. And in an age of global warming, Nature magazine says “…substituting concrete and steel with wood from sustainably managed forests, the building industry could curb up to 31% of global carbon emissions, according to research by Chad Oliver, a forest ecologist at Yale University in New Haven, Connecticut.”

What is missing is an Australian industry take-up of mass timber. A few suppliers have begun manufacture of CLT panels and glulam structural components, but more are needed along with more knowledge in designers, engineers and builders. It’s not a question of whether tall timber is the future; it’s whether we import or produce it.

As Lend Lease’s Daryl Patterson, who worked on Forté, puts it, “I would be strongly encouraging structural engineers and architectural designers to make themselves familiar with engineered timbers.” 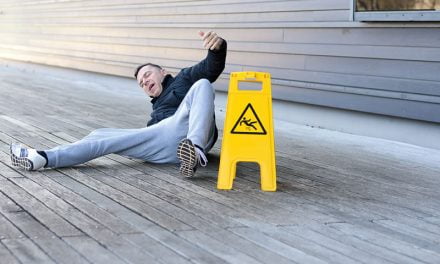 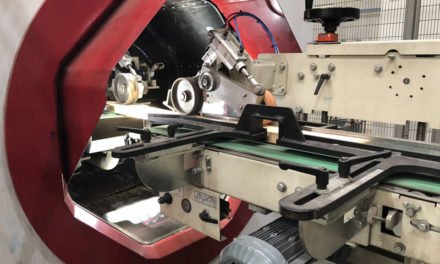 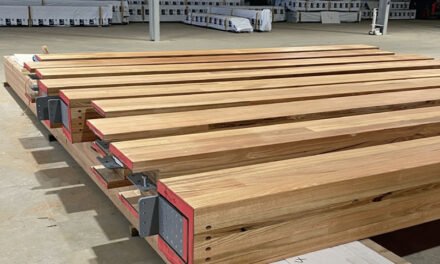