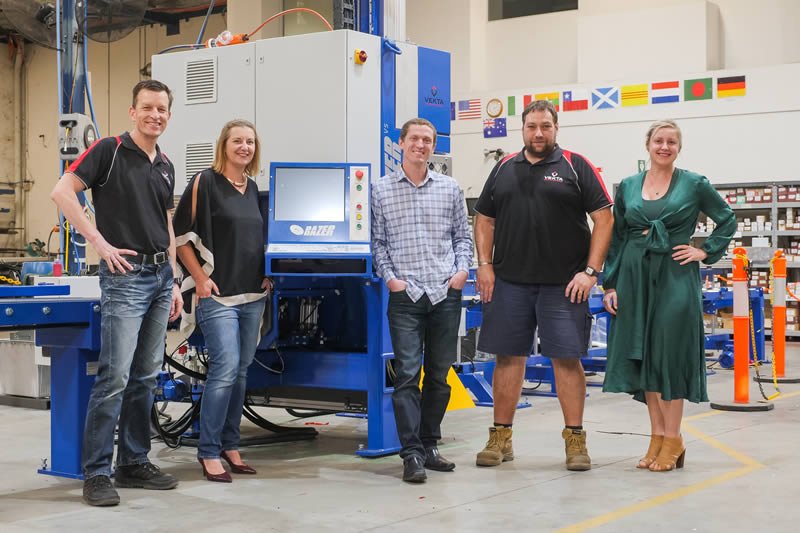 From one engineer’s belief that timber automation was worth investing in, to a thriving international company running out of Perth, it’s been 10 years of can-do.

Craig Bull, truss and frame equipment support manager at Dahlsens in Melbourne, has been in the industry long enough to have some firm ideas on what he does and doesn’t like. “Dahlsens has had a relationship with Vekta since about 2014 or 15,” he says. “But I’ve known Ed since about 2005 and this is the third business I’ve been at where I’ve bought product from them. There are about 50 reasons why.”

Not a bad endorsement for a company that began with a ‘failed product’.

Ed Serrano, Vekta Automation’s managing director, moved to WA from the US as an undergrad student to enrol in Curtin University’s Mechatronic Engineering degree (essentially robotics and other automated systems). Straight out of university he secured a job with PFP Technologies in Perth, and started to build his career.

Serrano considered the product to be advanced, and could see multiple ways in which the technology was industry-leading in its first few years. “But it wasn’t profitable,” he says. “There weren’t the sales and its reputation in terms of performance and support was pretty poor. The company wasn’t very customer-centric and their interests weren’t in timber, so during the GFC, they decided to mothball the entire line.”

Serrano went to the managing director with a list of things they could do differently to make the product work. “I was 28 years old and not long out of uni,” he admits. “So he said ‘Thanks, but no thanks.’”

PFP looked for other companies to buy the technology, but credit was still tight and so, lacking buyers, they decided to wind it up. Ed, his wife, Shelena, and brother put together a case to buy up the work in progress and the IP, and also to sublet a section of the factory and contract PFP to do some manufacturing. Happy to get something rather than nothing for the product, PFP agreed.

“And Vekta basically started from that,” says Serrano. ”We focused on the development of the Razer itself to make it perform better and last longer. And the other main area where we made a big difference was customer service and support.”

Ten years on, Vekta operates across Australia, New Zealand and the US.

At that time, much of the industry was still apprehensive about automation. “So much so that we put the word ‘Relax’ into our branding,” Serrano quips.

“To be fair, our earliest saw had codes and error messages that were so complex, you had to be an engineer to work out what they were saying. So we asked ourselves, ‘Who’s our audience?’ and we decided it was a 15-year-old kid with no formal training and we revamped everything with that kid in mind.”

Along with simplifying the interface, Vekta dramatically improved the product’s customer support and servicing.

“We started jumping on the next plane if we needed to,” says Serrano. “We would work in the middle of night or early in the morning: whatever we needed to do to support them so they didn’t feel they were being left to their own devices. We still do, there are just more of us doing it now.”

Vekta’s first successes came in New Zealand, where the Razer was new and customers saw only its benefits. But as word spread, the Australian market grew, too, and a US manufacturing site followed.

“Operating with the time differences was a bit tricky in the beginning,” Serrano says, “but once the US site opened, we had more working time zones covered for taking calls.”

Now, support engineers are based in Auckland, Melbourne, Perth and Minneapolis.

“We’re now looking at Queensland and NSW,” says Darina Gassanova, Vekta’s customer relations manager. “We want to be able to get someone to wherever they need to go quickly. We already work closely with other providers, including nailplate providers and local technicians. So if we can’t get there ASAP, we can talk through the work with them. There’s no ‘you can’t touch the saw without voiding something’ for us. We focus on keeping unscheduled downtime to a minimum so the customer can run the saws.”

Those customers appreciate the effort. “It’s best in class,” says Bull. “Nothing’s too much of a problem for them. Whenever there’s an issue, they’ve got parts on the plane, they’ve got boots on the ground. They care, which is quite rare. They follow up everything to the nth degree. They don’t just set and forget, or say ‘We tried to ring you’.

“The fact it’s Australian-built is important to us. It means we get local support and parts readily without having to wait for anything to be shipped from overseas.”

Nathan Salama, production manager at Sydney Frames and Trusses, usually doesn’t even have to wait for an engineer. “They’re on the phone whenever I need them,” he says. “Generally, they’re able to log in remotely and sort problems out within the hour. Our first Razer was one of our first fully automated machines and, starting out, we had no idea of what was what. So having them on board was a big help.”

Salama’s first Razer wasn’t his last. “I’ve got two now,” he says. “We bought the second because we were growing. We went back to Vekta because the Razer can push out a lot of components in an eight-hour shift.”

Routine maintenance schedules are managed by a dedicated staff member and planned well in advance to keep costs, including flights, as low as possible.

“They know how many hours of use each part has had and so will swap them out pre-emptively near the end of their working life,” says Bull, “rather than wait for something to fail. They’re also very flexible. If we ring up and say, ‘Sorry, we’re too busy for a service tomorrow’, there’s never any complaints. They might swear privately, but they always accommodate us and help us reach our goals and targets.”

From the first days of the company, it’s been a story of continuous development.

“I’m a robotical engineer,” Ed says. “I’m more interested in solving problems, than business, which is why I have a good staff around me.”

Many of those problems to solve come from customer feedback. Every Vekta service engineer is empowered to advance not only requests for hardware or software changes, but also their own solutions

The result is happy staff and happy customers, who benefit from product developments small and large.

“We have an opportunity to cut certain components on these saws that we wouldn’t normally cut,” says Bull, “But it comes with OH&S issues. We approached Vekta and they’ve come up with software to add to their build that’s now allowing us to move around that and actually make our place a safer environment to work in.”

Some solutions are larger-scale. The P3 Printer was introduced over five years ago and is still a leading piece of technology.

Salama credits it with improving both the installation of product on site and Sydney F&T’s production. “We place particular prints on the top and bottom plates that show the direction of the frame, instead of having to manually mark it, which takes a lot of time. Between that and the saws, it’s cut our overtime in half. We’ve been able to take on more orders and get into other markets. We now supply straight-cut components for wholesale timber distributors.”

The P3 is joined by the Stakpro, which allows automated lifting of frames and trusses, and the new Packfeeder, which is designed for optimal automatic picking.

Upcoming products include advances on the P3 Printer technology, entering the automated framing space (due for next year), better ways of managing waste and treatment, plus novel ways to move and store finished product in small plants that lack storage, as well as working on a new saw.

“A key point is that we don’t ever develop something just for the sake of having a competing product,” Serrano says. “If we don’t think that we can do something substantially better than what is available already on the market, we won’t touch it.”

One telling aspect of how Vekta has managed to build such a strong company in only 10 years is the enthusiasm of both staff and customers for the company.

“For us, our customers are partners,” Serrano says.

“We want to be solution providers for them,” Gassanova says. “They’re already paying for the engineers in our support teams to be on their sites for repairs and services. So we add assistance with areas where perhaps they could do some things a bit better or else solve bottlenecks, even if those performance solutions have nothing to do with our product line.”

Asked about the corporate culture at Vekta, Gassanova says, “We’re not a corporation. We’re a family.”

Creating that family atmosphere has taken effort. Hires start with assessing professional skills but end with looking at intangibles to make sure they’ll be a strong fit. “The most important thing is how they approach problems and how they deal with each other and work in a team,” says Serrano.

Every year at Christmas, the whole Australian and New Zealand team come together, including partners flown in at company expense. In addition, the US and ANZ engineers can move between nations to broaden their experience.

“The company-wide open-door policy means everyone, from machinists to directors, has a voice and an ability to provide input,” says Gassanova. “When you walk in, you actually look forward to the day ahead and the difference you’re going to make.”

“We’ve worked really hard to get a really strong culture here,” Serrano says. “And everyone here would consider each other as friends. That’s taken a lot of time. At last count we had something like 15 different nations represented within our organisation with about 50 people globally, so it’s an important achievement.” 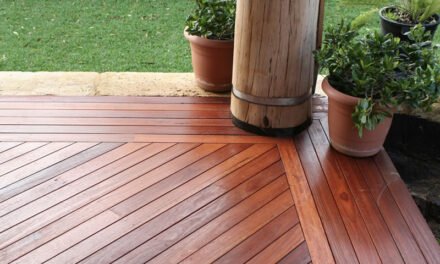 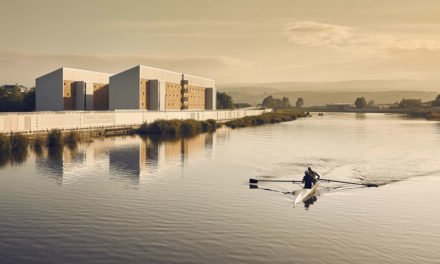 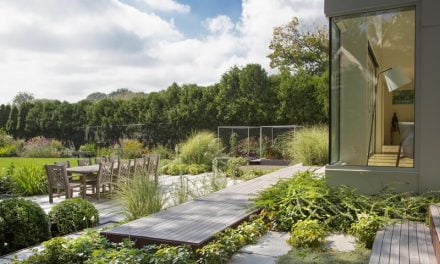