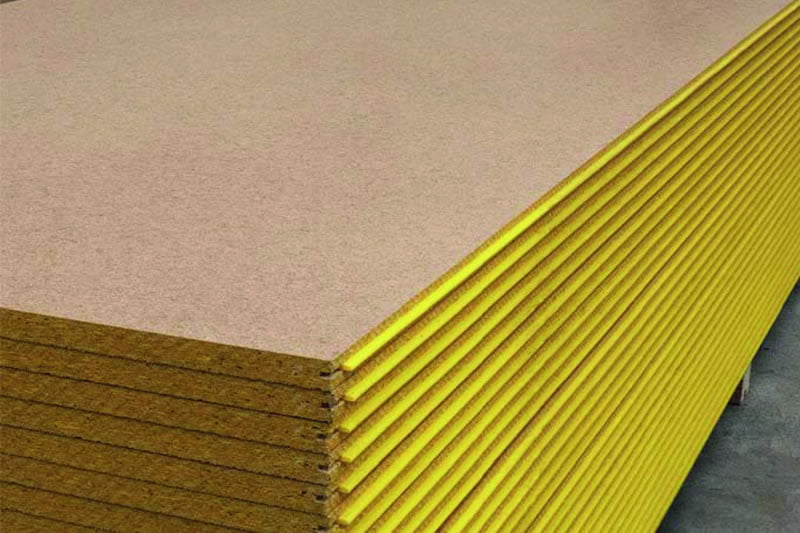 Recycled timbers are showing their worth – environmentally and economically – in the supply chain, both as high-quality designer timbers and as quality wood fibre.

Durability is a key selling point for all of us in the timber industry: our product lasts. And yet at a time when we have increasing pressures on fibre supply, it’s still too often treated as a disposable resource. But for those clever enough to be taking advantage of circularity in the supply cycle, there are significant financial rewards – as well as benefits to the environment.

Unlike other construction resources that require big energy inputs to recycle, timber has myriad uses, many of which require little processing. From the straightforward reclamation of old buildings, piers and other constructions to be used as structural or decorative elements in new builds, to offcuts and fibre going into boards, composites and paper products, to sawdust being used for fertiliser or biomass in energy generation, every part of the product’s lifecycle can come with a second chapter.

Timber Merchants Australia (MGA TMA) has recently announced its Sustainable Timber & Hardware project in conjunction with Aussie NRG. Currently being developed, the project aims to redirect scrap from landfill-bound waste streams into new products, cutting disposal costs and creating profits. It estimates over 1.5 million tonnes of wood are wasted every year, with each tonne of wood waste that ends up in landfill producing 600kg of CO2-equivalent gases.

It’s offering complimentary waste assessments to its members as part of the new scheme (call 1300 849 908 for details).

TMA is far from alone in turning waste into reward: read on for one company making boards from scrap and another making the old new again.

From bin to board

Borg Manufacturing is a leading Australian board producer with a long history of innovation. They sell their product directly to fabricators and retailers.

“We ship flooring from our factory to fabricators around Australia,” says Stuart Toakley, Borg’s sales and marketing manager, “and we build up strong relationships with those fabricators. We realised that they were producing a lot of waste wood, and we need to use a lot of wood fibre… So we put two and two together.”

The result of that sum is Structaflor, a structural grade particleboard flooring sheet that’s particularly suited to platform construction.

Coming up with the idea was fast, but designing the process for managing the recycled fibre collection from took some time. “We needed to have EPA approval,” Toakley says. “Out of that we created a document for the people who want to deliver or have us pick up and accept their wood. It puts certain limitations on exactly what types of ‘urban wood residues’ (UWR) we can accept, and affirms it’s not contaminated with plastic and so on. They sign the document to guarantee the quality of the product, and we take it from there.”

The waste is sorted at the source into separate types, for example solid offcuts from frames and trusses, particleboard offcuts from cabinet makers, sawdust, pallets or LVL offcuts.

On arrival at Borg’s Oberon plant, three hours west of Sydney, the load is inspected, then solid waste is shredded and magnets remove any steel (such as staples or nails from pallets). The resulting fibre is stored in discrete piles before being fed into the particleboard process in tandem with chips from logs.

“We have three collection sites at the moment,” Toakley says. “One at St Marys in Western Sydney, one at Somersby on the Central Coast and our Oberon factory. People can deliver their wood to us, or we can pick it up from them using a variety of means. Some use bins we drop with them, sometimes they put it into bulka bags.

“A real benefit is that there’s a cost saving for the fabricators. It ranges by region, but they could be paying rates over $200 a tonne to have their wood taken away for landfill. In most cases we’re saving them about 50% of that cost. Over the course of a year, that can be up to tens of thousands of dollars in savings.”

The Structaflor product itself comes with colour coded tongues and edge wax to show the different types, including termite treated and heavy duty. Its inbuilt moisture protection means it can survive up to five months of weather exposure well during the residential construction phase.

A lot of it is bought by the same fabricators who supply the waste fibre. So, as Toakley says, “We’ve got new multi-purpose trucks in our fleet that we can deliver packs of board to customers and then use the same trucks for filling at the top with waste wood and then take it back to our factory.”

The process is now up and running and increases in the plant’s capacity to handle wood waste are underway. “Down the track we’ll most likely open waste wood recovery centres in Melbourne and Brisbane, too,” says Toakley.

“We’d like to sell the flooring product to every fabricator in Australia if we could. It’s also currently being stocked by a good selection of trade merchants, including many Mitre 10s nationwide and Bunnings. It would be great if we could expand that!” 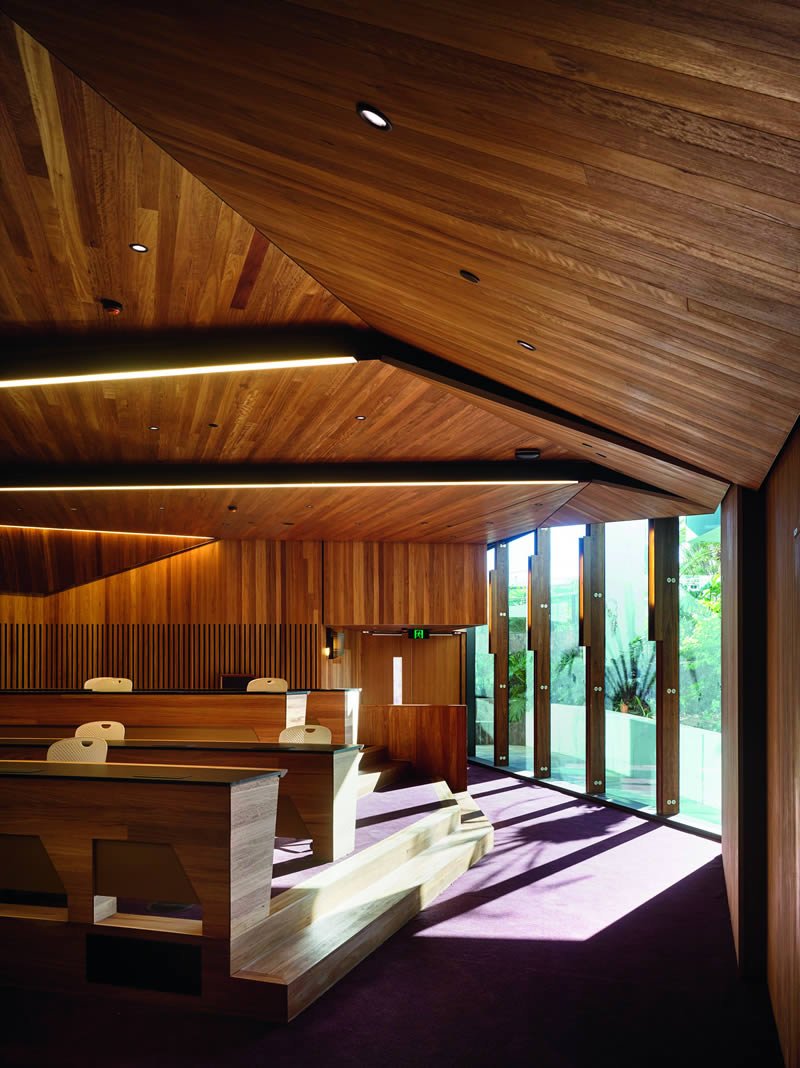 Teaching facilities at the University of Queensland Oral Health Centre.

At the other end of the spectrum is the high-quality recycled structural, decking and cladding timber product sold by suppliers such as Kennedy’s Timbers.

“The demand is really positive for us,” says founder Michael Kennedy. “There’s an increasing awareness of the product that we’re doing; it’s increasingly being specified and used. People know they can get it, so they’re happy to specify it for large projects.”

Those projects include a student accommodation building at the University of Tasmania in Hobart, with Terroir Architects in association with Fender Katsalidis Architects.

“That’s a few years old now, but it’s a great building,” says Kennedy. “The architects wanted to create an environment that was warm and inviting to come in to. There are a lot of overseas students at UTAS and they wanted to give them a nice place to stay to so far from home. Much of it looks more like a five-star hotel than student accommodation, and it’s very Australian.”

The University of Queensland Oral Health Centre makes extensive use of spotted gum and blackbutt from old buildings and warehouses Kennedy’s have taken down. “It’s a dental school, with a training treatment facility attached and they’ve used a lot of timber throughout to create the biophilia impacts of a warm, inviting, place,” Kennedy says. “Normally you think of a dental school as white and clinical, but this is surrounded in wood and very natural. It’s got a lot of praise from students and everyone who works in it.”

Those biophilia – feeling satisfied through connecting with nature – impacts are particularly useful for the patients at the centre, who are treated by students under supervision. “It’s both a learning centre and a practical dental centre,” says Kennedy, “so it’s to everyone’s benefit that there are beautiful and inviting surroundings to put people at ease.”

The timbers are reclaimed from structures that have stood for decades, sometimes over a century, and feature well-weathered hardwoods that have unparalleled durability and dimensional stability.

“We’re doing a salvage job at the moment that’s knocking down a big old army warehouse called Eagle’s Nest at Banyo in Queensland,” Kennedy says. “We’ve recycled 17 semi-loads of timber out of there. It’s unique – the warehouse was built in 1943, so it’s rich in history.”

Another WWII structure that Kennedy’s has reclaimed is the Cairns Wharf and Boardwalk, from 1942. Protected under a thick concrete deck through their working life, the timbers are in remarkable condition. “They’re beautiful FNQ rainforest timbers including turpentine, crow’s ash and hickory,” says Kennedy. “Obviously we’ve shut down logging in the Daintree since then, so this is historic timber.”

Ironbark and spotted gum from the Boardwalk is being reused for a large decking project Kennedy’s is doing with Lendlease at Barangaroo in Sydney. “They looked at a whole a range of different options for their decking and they eventually came to us looking for the recycled option for its durability and the green credentials that it has,” Kennedy says.

Although architects talk a lot about provenance and sustainability in their projects, Kennedy admits the reasons they consider recycled timbers are more pragmatic: “They go with the look first, and then the dimensional stability is another core benefit. These timbers aren’t going to shift. They perform to an extremely high standard. So you don’t need to choose between these as priorities, you’re getting both. And then as an added bonus on top, you get the environmental points and often a great story about where the timber comes from – like a double cherry!” 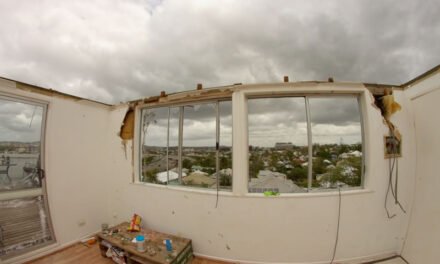 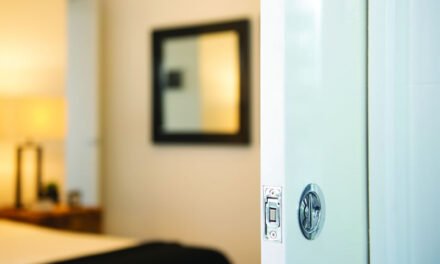 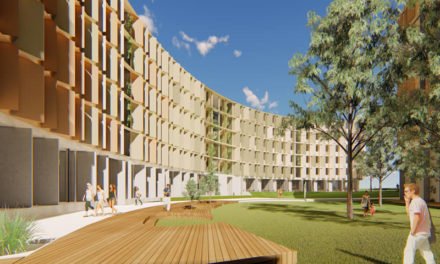 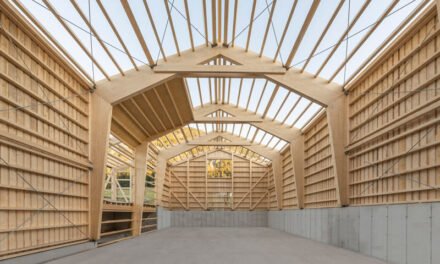