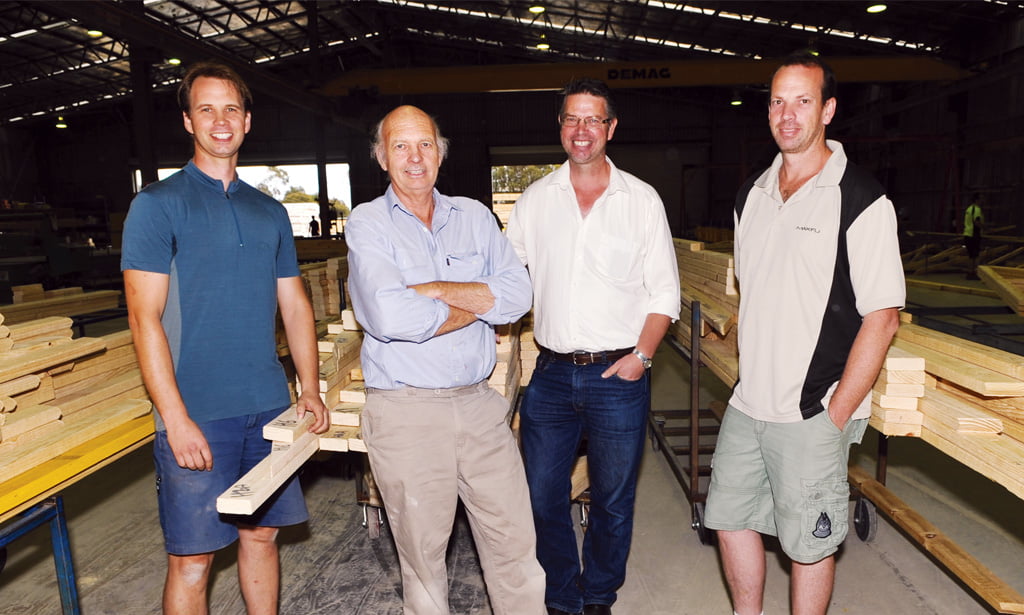 Like so many businesses in Australia’s timber industry, Universal Trusses, located in the Canberra suburb of Hume, has been a long-time family affair. Arthur Potter, the eldest son in the Potter family, works alongside his brothers to run the truss operation from the country’s capital. Arthur’s father, John, had previously worked in the building industry for more than 40 years.

“It all started with him – Dad started out as a builder working with steel frames and trusses, and then he was converted to timber,” Arthur explains.

Joining John in the business were his sons Arthur, Doug, Roy and John. Originally the family was based in Mildura, Victoria, but made the move to Canberra 20 years ago when the economic climate provided an opportunity they couldn’t ignore.

“The economy in Victoria had tanked, and at the same time Canberra was going gang-busters, so it wasn’t a very hard decision to move here in the end. Simply, there was just more work,” Arthur says.

Universal Trusses is a unique business within the Australian Capital Territory. Operating for just over 20 years now, the business in one of the oldest players in Canberra’s truss game.

“We’re a fairly old, established business in Canberra now. People forget that Canberra’s a very young city – there’s not a lot of old, traditional businesses like there are in other states and territories.

“Where you’d have businesses that are three or four generations, you just don’t have that in Canberra. So to say we’ve been here for 20 years – it’s a big thing.”

Five years after the move to Canberra, the boys’ father John decided to take a step back and “˜semi-retire’, opening the door for Arthur and his brothers to return after time away from the family business pursuing other careers.

“We’d already had a good start, and thought that we could turn it into something bigger if we all pulled together. It was perfect timing,” Arthur says.

The Potter men all have their own corner of the business to take care of, as Arthur explains.

“I mainly look after the estimating and sales, and the customer service. Doug looks after detailing, Roy looks after purchasing, framing, a bit of the management, and the youngest brother John looks after the truss side of the business”.

Universal Trusses currently has 60 employees, so with the younger generation stepping in, how does John relax today?

“He comes in occasionally, just to check on things – but he’s got his hobbies now. He’s also in the process of building a boat at the moment, so that keeps him busy,” Arthur remarks.

The decision to move the business to Canberra all those years ago has paid the Potter family dividends. As Arthur says, “The growth in the last 10 years has been amazing. People just keep on coming in”.

Universal Trusses acquired a local fabricator business, Capital Trusses, back in 2003. Following that purchase, which Arthur describes as “The biggest thing for us at the time, was a bit of a gamble, but one that paid off”, Canberra’s housing construction market has continued to grow.

The past few years have also seen an increase in the complexity of design briefs, says Arthur, with more unusual houses and more challenging work for the team.

“I think there’s been a couple of big changes. The size of the blocks of land, for instance, they are now smaller – so the houses have only been able to go up from there.

“The designs of those houses keep changing as the land becomes more expensive. This has meant the designs are more detailed. Compared to what we were building 10 years ago, which was just your standard, run of the mill, four bedroom house on a single level,” he says.

So in 2013, Arthur spearheaded the push for Universal to become even more automated, by purchasing the Auto Eye Truss System from Randek, one of only two in operation in the world.

The family first heard about the machine at the Frame Australia conference in Melbourne. After some thorough internet research, Arthur and his brothers made the decision to fly over to Norway. As Arthur explains, it was certainly “˜love at first sight’.

“We saw it in the other factory producing the trusses so easily, and that was it,” he says.

Now, after just over a year of using the Auto Eye, the risk appears to have paid off.

“It’s made a huge difference because it’s allowed us to produce more work. We can now produce it when we need it, so we’re not as reliant on labour.

“We can run the machine for longer when we’ve got the work, and we can run it for less when we don’t,” Arthur explains.

As a family-owned company with 60 employees, Arthur says that the well-being of the staff at Universal has always been a top priority for management.

“I think we’re like everybody else, in that we are always trying to improve things – striving for efficiencies so we can produce a quality product.

“It is always a balancing act between the actual price and what the market will accept, the quality that we want, and the ability to serve the customer,” Arthur says.

It would be easy to assume that bringing in a high-profile automated system, such as the Auto Eye, could potentially replace some of the loyal staff at Universal. But that’s not the case, Arthur says.

The relationship between management and staff at Universal is impressive, and a core aim is to ensure all employees are looked after.

“The huge difference, and benefit, is that the machine puts less physical strain on our employees,” Arthur explains.

“The challenge for us is making sure an employee who has been with us for 15 or 20 years is going to be able to stay, and to achieve that you’ve got to be able to offer them something more. That’s what the machine gives them – it’s a new lease of life for everybody”.

It is certainly an exciting era for Universal, as Arthur talks about the future, and what the company is now able to offer with the Auto Eye on board.

“We can now offer more flexibility to our customers, especially in terms of design. We’ve got plenty of architects coming through the factory so that they can see what can be done, and as a result they’re going back to their desk saying “˜Now I can draw something new, because I know it can be built’, which is great to hear”.

In terms of business strategy, Universal Trusses appears to have it mastered. As Arthur explains to TimberTrader News, the opportunities won’t go away, but as a business owner, it’s what you do next, and how you adapt, that counts.

“The houses we’re producing trusses for were going to be built anyway, regardless of whether we worked on them or not.

“So if you don’t keep upgrading the equipment, you can’t go on producing the new designs with old techniques – it is as simple as that. You will just be going backwards,” Arthur says.

While it was a big gamble for Arthur, his brothers, and the rest of the team at Universal Trusses, the installation of an innovative automated system has certainly proven its worth.

As Arthur sums it up, “It’s a new lease of life for everybody. It’s exciting”.

It’s a state of mind

Bracing our roofs for life