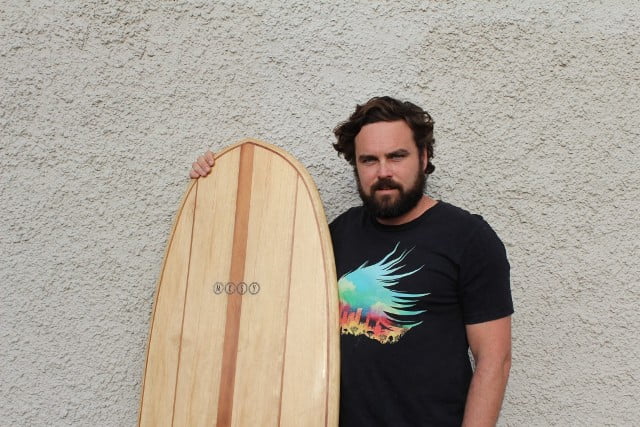 Two years ago, Michael decided to get back to basics by making timber surfboards, a throwback to the golden era of surfing.

“There’s not that many people really doing it because it’s quite niche,” Michael Powell reveals to me as we sit outside a laid-back cafe on a sunny Brisbane afternoon.

Michael’s day job perfectly complements his hobby-turned-business. He is an Industrial Technology and Design teacher, teaching Graphics, Technology Studies, Woodwork and Metalwork. As Michael explains his teachings are centred on the design process.

Michael is also the founder of MKSY (pronounced ‘muck-sey’) Surfboards, a business that he operates when he isn’t teaching at the local high school. He produces hand-made timber surfboards, each piece unique and tailored to the customer.

MKSY hollow wood surfboards have minimal impact on the environment, with a longevity not seen in traditional foam boards.

Growing up in the Sunshine Coast Hinterland, Michael’s upbringing was quintessential of the coastal lifestyle – surfing with mates every weekend.

However, Michael and his friends grew frustrated with their foam surfboards, which had a tendency to break easily, meaning that the non-biodegradable polyurethane and expanded polystyrene from the foam boards could become unnecessary landfill and negatively impact the environment.

Something had to give.

After reading an article about a timber surfboard maker from New Zealand, Michael was impressed with the craftsmanship. “It was just phenomenal – I just thought ‘I’m going to see if I can work out how to do it myself’.”

“I was reading a fair bit and trying to nut it out in my head. I ended up making a board and then all my mates would not ease up – they got so jealous and wouldn’t let me stop at one!” Michael laughs.

Soon, after being pushed by his mates to do more, Michael realised the full potential of his product and the beauty of it being made from sustainable and resistant timber materials.

During our interview Michael even whips out a sample for me: Paulownia timber to be exact, which is used to craft each individual surfboard.

“It’s basically like balsa wood. Not as dense as a strong hardwood. But it doesn’t dint or absorb water, and is really nice to work with,” Michael says, while trying to dent the timber in front of me to prove his point.

A perfect material to support the knees of those surfers who come to Michael for a special ‘edge’ when tackling the weekend waves.

MKSY Surfboards has now been operating as a small business for just under two years, a juggling act for Michael who explains to me that it as much as he loves the product – he still can’t shake his passion for his day job.

“My mates just really pushed me to do more, which I thought was awesome of them. I’m still a teacher but, ideally, I’d love to be building more boards as well”.

However given the nature of the task at hand, the end result for Michael means that there is considerable time involved in the construction of a surfboard.

“The friends I surf with all ride them. It’s like any niche market, the buyer has to be willing to pay more to get a superior product, one that can last 10 to 20 years,” Michael says.

As he explains the characteristics of a board to me, it becomes clear why this product is just so popular.

“You buy a foam board, and your knees hit it and ding it. In the photos (of my wooden board) you can see it is exactly the same as when I made it the first day.

“Some people just don’t see the value in that. They’re happy to buy a board every 12 months, which is fine,” Michael says, a little bewildered.

Michael’s appreciation of timber, and his application of it through his business venture, is tied to his strong belief in eco-friendly resources and his deep respect for nature.

“The lifecycle of the Paulownia tree is eight years, which is quick! When they mill it they just cut the tree down and it will start growing from that fresh cut straight away, so there’s no need for another plantation.

“If you look at it that way, it’s a quick growing tree that needs minimal labour to continue on – it is really quite sustainable,” Michael states.

When it can often take up to 30 years for some trees to be ready for milling, the properties of the Paulownia make it a great source for Michael and MKSY.

Early on in his venture, Michael sourced the Paulownia timber locally from a man named Geoff Moase.

Geoff worked under the business name of Dovetail Surfboards, but unfortunately, as Michael explains, he went to Bali and ended up passing away while he was there.

“It wasn’t long after I met him, and I bought some material from him for a number of boards. He was a really good guy and inspired me to really get into it. He gave me a couple of hours when he really didn’t have to,” Michael says.

The timber, as Michael found out, wasn’t easy to source. After several trials from different suppliers, Michael soon found a man in his own state of Brisbane who, coincidentally, was one of Geoff’s suppliers.

Michael now buys direct through the Paulownia Timber plantation and suppliers in Brisbane.

“It’s not like you can just go to a Bunnings, or a normal wood supplier, and purchase this stuff,” he says.

The weight of the board, as Michael explains, is crucial to the beautiful end result. Another type of timber just won’t work.

Michael sticks to his guns, and it appears it’s working for him. The feedback he gets from other surfers when they see him clutching his original MKSY board is one fuelled by a keen curiosity.

“I say to people who have bought a board, as a joke, ‘give yourself a good 10 or 15 minutes before or after you enter the surf’, because people are always stopping me when I go surfing to ask questions like ‘what’s that? where’d you get that?’,” Michael laughs.

And once they do get to dive into the waves on their new timber board?

“The ride-ability, it is different. The board’s stiffer, but more responsive and faster,” Michael explains.

“It’s just a really nice feeling riding a wooden handmade product compared to a machine-made block of foam. I’ve had many chats out in the surf with people who are interested in what I’m riding,” he says.

So far, Michael says, he hasn’t heard any negative feedback – a rarity for the first two years of any business.

“The roots of surfing are back in the 1940s or 50s, when we didn’t have that foam board, and surfers were all riding a wooden board,” he reflects.

“The thing against it today is that it’s very labour intensive, which is why it can be a lot more expensive.”

BOARD TO THE FUTURE

While Michael currently lives and works in Brisbane, it’s his roots on the Sunshine Coast that pull him back.

“I’ve got a workspace up in the Sunshine Coast Hinterland, it’s actually where my mother lives, and underneath there’s a really big, nice workshop.

“It’s in the bush, so I just love to go out there. Most of the boards I’ve built are up there,” Michael says.

While he is still humble about the promise of his emerging business, Michael’s confidence in his product is hard to miss. Still, his laid-back nature that is synonymous with his coastal roots always shines through – even when it comes to discussing his ambition.

“It’s just a small thing at the moment. I’d love to grow the business, but I just want to make sure I do it at the right pace and not rush it,” he says, adding, “I don’t want to be overwhelmed by orders and end up skimping on the time spent on each board, and the quality,” he says.

Maintaining quality and sustainability? Sounds like a good plan.

If you would like more information about MKSY Surfboards you can go online to mksysurfboards.com

Maintenance comes to the surfaces